A long time ago, in a galaxy far, far away

Star Wars fans of all ages know that familiar phrase and can picture the blue text scrolling across a black screen as the iconic opening of one of the most successful movie franchises of all time.  The film that launched an entire industry unto itself and created legions of diehard fans, was released on May 25, 1977 and as with all the sequels, and prequels to come, was a box office smash!  The Star Wars films spin an epic tale of good versus evil, Jedi versus Sith and their battle for galactic supremacy.  With swashbuckling action and special effects, amazing costumes, family drama, political intrigue and a bit of levity thrown in for good measure, there is something that appeals to everyone in the Star Wars films.  Who can forget the moment in the Empire Strikes Back when (SPOILER ALERT!) we discover that the cloaked and masked Darth Vader is in fact the father of our hero Luke Skywalker! Nobody saw that one coming! In addition to Vader and Luke, there are many popular characters: the anti-damsel in distress Princess Leia; Han Solo the rakish smuggler and his loyal Wookie co-pilot Chewbacca; The wise and deceptively agile Jedi Masters Yoda and Obi Wan Kenobi or Boba Fett the mysterious bounty hunter, but that’s just to name a few.  Who is your favorite Star Wars character? 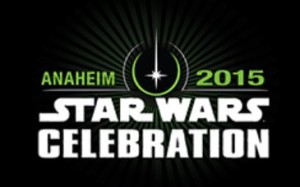 May the Force Be With You
Are you more in touch with the dark or light side of the Force? Fans from around the world were able to discover their allegiance during the Star Wars celebration held April 16-19, 2015 at the Anaheim Convention Center in Anaheim California.  Attendees were treated to costumed characters, exhibits, screenings, exhibits and exclusive merchandise.  Celebrity panels and autograph sessions gave fans the opportunity to meet face to face with some of their favorites.  This event was all the more exciting given the anticipation surrounding the release of the next chapter of the Star Wars saga. Disney is set to release Star Wars: The Force Awakens later this year and with it fans will be able to catch up with old favorites and meet a whole new cast of characters.  Because of all of the excitement, the Star Wars Celebration had to go off without a hitch. Disney contracted Pyramid Logistics to ship their exhibit to the Anaheim Convention Center for the Star Wars Celebration. Of all the exhibits, Disney’s had to have to greatest impact given high fan expectations and Disney did not disappoint thanks to Pyramid Logistics. Pyramid Logistics…using the Force for nearly 20 years.