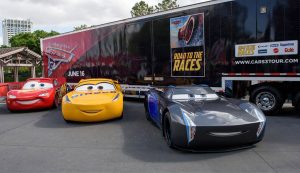 Hired by Disney.Pixar, this renowned logistics firm successfully accomplished studio transportation for the “Road to the Races” nationwide tour with 3 life-sized Cars characters for the promotion of Cars 3. The tour rolled through 27 cities, gearing up from Disney Springs in Orlando, through Miami, Tampa, and much more ending at Sonoma. The look-alike of all the characters were handled with expertise and years of experience.

As the life of Lightning McQueen, 5-time Piston Cup champion moves on, he experiences a brutal brush with mortality. At 40, he realizes that he would no longer be able to do the one thing that he loves the most. The film introduces two more characters, a deuterogamist, trainer Cruz Ramirez, and the villainous millennial Jackson Storm. Cruz Ramirez, a 2017 CRS sports coupe, fuels up McQueen with her optimistic, sunny air and drives him to use his anger to his potential while Jackson is the advanced nemesis for lightning, ready to dump the old guy, who he thinks ‘have had their days’. Jackson Storm, a 2017 custom built a next-gen racer, stands for everything that has changed in the real world since the introduction of Cars in 2006. He has been designed in such a way that standing next to him, Lightning looks old.

The nationwide promotional tour of Cars 3 roared to life on the 23rd March in Disney Springs, Orlando. Two specially outfitted vehicles transported the three characters throughout the US, a truck for carrying our beloved Lightning McQueen, Cruz Ramirez and Jackson Storm and another made especially for the exhibits. Alamo Rent a Car, Coppertone, Oral B, Crest, Dole, Mattel sponsored the wondrous event. Each of the sponsors organized various activities, which created an air of excitement and relationship with the three characters out on the road. The glimmering, life-sized look-alike of lightning McQueen spurred kids and even adults to grab the opportunity of a great picture with him. Other activities included a giant coloring mural of McQueen and friends by Alamo Rent a Car with a color pencil pack souvenir, racer pit crew by Coppertone. This encouraged visitors to engage in tire-changing activities, “Cars” themed oral care products by Crest and Oral B, “Cars 3” inspired recipes and vegetable smoothies by Dole to fuel up people. Mattel set up an interactive play area and a collection of the cast characters from past and present, making the whole activity more interesting and lively. A sneak peek of the movie was provided in the Cinetransformer Mobile Movie Theatre.

The whole tour was centered around the presence of the full-sized characters which were transported with safety and punctuality by Pyramid Logistics. Studio Transportation comes with its own intricacies, but the special, custom-built vehicles of Pyramid Logistics provide solutions and secure options for all of them. Pyramid Logistics have been a part of movie studio transportation for some of the biggest movies like The Green Hornet, MIB3, Total Recall, etc. We have proved our mettle in movie vehicle transportation from day one and will continue to do so.